Enterosgel business is booming. At the end of the period MAT 2016, sales of enterosorbents amounted to 121 million euro in value terms and to 106.5 million units in physical terms.

Review of the retail commercial segment of the pharmaceutical enterosorbent market in 2016.
No matter how practical and efficient innovations can be, they definitely experience hard time competing with tried-and-true technologies deeply rooted into people’s lifestyle after decades of faithful serving.

For many years old school activated carbon (78% in units and 22% in value terms) took the enterosorbent market. Regardless of its capacity to traumatize the gastrointestinal wall, necessity to take a handful of charcoal tablets at a time, and its adsorption activity of more than 60-fold lower than, any modern enterosorbents such as Enterosgel.

Business is booming
At the end of the period MAT August 2016, sales of enterosorbents amounted to 121 million euro in value terms and to 106.5 million units in physical terms. At the same time, steady positive sales show growth in value terms for the last three years. MAT recorded a significant decline in sales in August 2015 (-22%) and the trend was set towards the restoration of the previous market volumes in 2016 MAT (1%) (Figure 1).

Pour on the coal
TNK SILMA in Russia, known for its trademark “Enterosgel– mineral based polymethylsiloxane polyhydrate ”, tops the ranking of enterosorbent manufacturers. It is with a market share of 30.14% in value and 5.14% in physical terms, followed by other brands (20.31% in value and 5.27% in physical terms) and Beaufour Ipsen with “Smecta” (15.32% in value and 6.78% in physical terms). Colloidal silicon dioxide gained a position in the rating, taking the 5th place, with the market share of 6.49% in value and 2.28% in physical terms. Positive dynamics show OTC Pharm that took the 8th spot with the medication based on dioctahedral smectite. Its market shares in value and physical terms stood at 2.69% and 1.25%, respectively. Sales of Moschimfarmpreparaty dropped 3 positions with the trademark “Enterodes” on the basis of povidone. Other changes in the ranking are primarily associated with the rearrangement of forces among the activated carbon manufacturers, including a dramatic plunge in sales (-40%) of the company Medisorb and the maximum corporate sales growth of PFC Obnovleniye (Renewal) (+135%) and Uralbiopharm (+72%), (Table 1).

Various strategies were used by manufacturers to win their spots in TOP5. “Smecta” lowered the weighted average price by increasing sales of packages containing fewer individual doses. Its reducing the sales of packages #30, against the backdrop of boosted sales of packages #10. “Enterosgel” decreased the price by 17% after its rapid growth by 39% in the previous period. Fluctuations like these may be induced by an attempt to optimize the value for money – to get the maximum income and, at the same time, avoid losing customers. “Polisorb MP” raised the weighted average price as a result of introducing a less expensive single dose of the medication in bigger packages – 25 g and 50 g, while the price per unit was not subject to changes exceeding 3% (Figure 4). 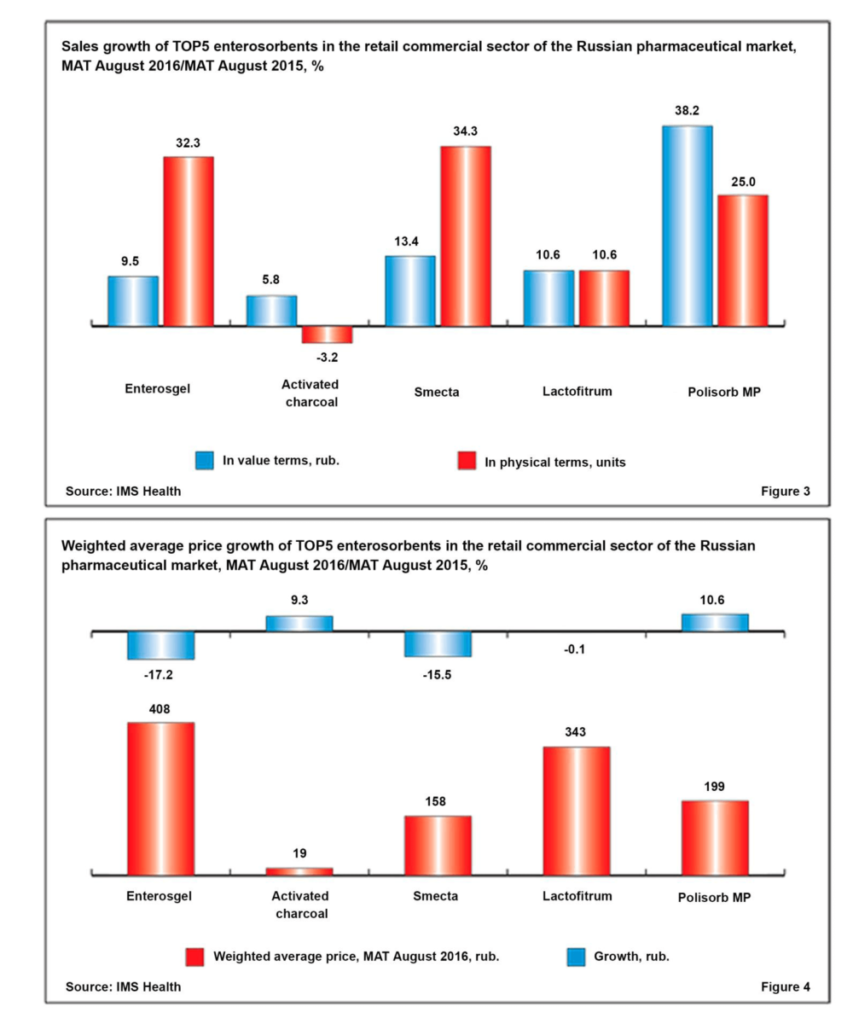 Top enterosorbents in the retail in 2016